Home Seafood Meat Contact Us About Us Seasonality Blog 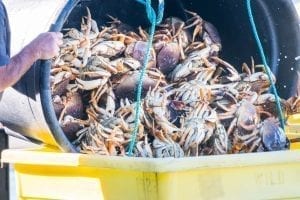 It’s been a tough year for commercial crab fishermen. A lawsuit cut the Dungeness crab season nearly three months short. The season typically opens in November and runs through the end of June. But this year, extra protections were put in place for whales, in the form of a shorter season. Under an agreement reached between three parties—the Center for Biological Diversity, California Fish and Game and the Pacific Coast Federation of Fishermen—the season ended in mid-April.

The root of the problem is a spike in whale deaths over the last few years during the spring migration season. Because the huge animals come close to shore to feed during their long journey north, they sometimes come into contact with crab fishing gear, and not all escape. In 2016 alone, there was a record 70 whale entanglements recorded.

The settlement not only calls for early season closures the next few years, but it also requires fishermen try rope-less traps, and react to entanglement hot spots.

Some fishermen see the shutdown as yet another unfair blow to a struggling industry. But here at Pucci Foods, we see it as an unfortunate, but vital step in maintaining an ecosystem that can only prosper if we all put longevity and health above business as usual. We encourage Bay Area fish markets to take a similar stand, and to address concerns and questions from customers head-on.

When customers ask why your market isn’t carrying Dungeness, (or, if you do, why the price has gone up) let them know about the landmark settlement. Couch it at as a temporary inconvenience that will surely lead to innovation in the crab fishing industry. Crab isn’t the first seafood to face a challenge to do things differently to protect California’s fragile coastal environments. Then, steer them toward the many other varieties of seafood that are plentiful this time of year, including yellowtail rockfish, mahi mahi, grouper, halibut and catfish.

Pucci Foods prides itself on supplying fresh seafood that is not only delicious, but safe and sustainable. After all, nothing tastes better than a clean conscience.